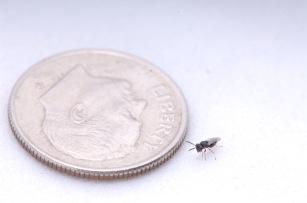 When packing up for a short paddling trip in mid-September I noticed a monarch chrysalis on the side of my canoe. I carefully removed it and using masking tape attached it to a wire suspended from my house. Weeks passed and other monarchs matured and emerged but this chrysalis turned very dark, then faded to tan. I eventually brought it inside where it hung on my refrigerator. Why? Because it looked too cool to toss into the garden.

A few weeks ago while packing my lunch for work I noticed dozens if not hundreds of tiny (harmless) parasitoid wasps emerging (I know a few people would not be excited by this discovery at 8:00 in the morning). Before leaving for work I popped the chrysalis into a glass tube to photograph at Prairie Moon Nursery.
During my 30 minute drive another 20-30 wasps emerged. Later that morning I was able to photograph the wasps as more emerged.

I forwarded these photos to the Monarch Joint Venture at the University of Minnesota and Carl Stenoien, a Graduate Research Fellow with The Monarch Lab at UMN was kind enough to reply: “These are probably Pteromalus cassotis, but I can’t be 100% sure without seeing them under a microscope.”

As we well know, monarch butterfly larvae depend exclusively on milkweeds and adults rely on the nectar of other native flowering species. I had never considered the less familiar species that depend on monarchs. How many other species go unseen? Like monarchs they too are in peril due to habitat loss but even a small garden with native plants can do a world of good (especially for these tiny Pteromalus wasps). •

A follow-up from Carl Stenoien: “I received the wasps today (and some were still alive!). They are, indeed, Pteromalus cassotis, a potential specialist on monarchs.”

View all posts by beewisefarm